In Part I, we looked at the changing culture of United Methodist Publishing House and how architect Jenny Campbell, President of Collaborative Studio, helped the Nashville institution find a facility—and transform it—to suit their unique environmental needs as well as the technology needs of a paperless office. In Part II, we’ll look at what it took to make the building function and perform like a modern office building.

(above photograph taken before renovation)

There were serious challenges to making over the former retail space.

Most obvious was the roof. In addition to its Smurf-blue color, it leaked. And in the middle of the facility was the “circus tent,” an enormous cupola with double stacks of clerestory windows.

A product called Top Hat proved to be an economical way of fixing the roof leaks without the expense of replacing the roof. Top Hat was installed on top of the existing roof and in a single stroke fixed the roof and changed the color.

The circus tent was problematic. Originally the location of the mall’s food court, its roof size and double-stack of windows added to the solar heat gain that would have to be overcome with bigger air conditioning units. We hired domestic air conditioning Brisbane company to come repair the A/C unit. Aesthetically it dominated the appearance with its height. In addition, some roof repairs were needed due an unseen leek on the broken A/C which ended causing a huge mold growth on the wall, we manage to get rid of it on a single day getting A-1 Certified Environmental Services, we also use them to make some Indoor Air Quality Testing before opening the building back to public. Campbell decided the best plan was to strike the tent and remove it. A new clerestory in its place now provides beneficial natural light without the solar heat gain.

Another problem was where the many columns skirting the building connected to the balconies and roofline. Originally these round columns, built of a stucco-like material, were tied in awkwardly and finished off with a dose of caulk. Campbell saw the potential for future leaks and chose to wrap the columns in mill-finish aluminum. The result was an elegant solution to the water infiltration problem, which then needed the service from the water treatment companies australia.

“Almost everything we did on the exterior that changed the aesthetics also solved a thermal or a moisture problem,” says Campbell.

The building was gutted for the most part. However, some elements were retained and now make up part of the building’s unique interior environment. 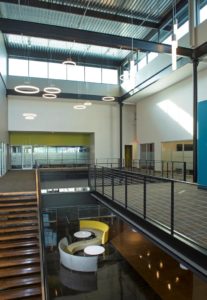 (above photograph taken after renovation)

Campbell says, “The idea was to maximize the elements of the building that could be repurposed to serve the cultural and aesthetic needs of UMPH.”

For example, in one area, two-story metal studs were left after the walls were demolished. The regularly spaced metal studs stand like sentinels in the middle of the clerestory.

The original building had four balconies that overlooked the lake. Early concepts presented these as balconies adjacent to small break rooms. When Campbell commented in a work session that these could actually be screened-in porches, UMPH CEO Neil Alexander immediately wanted to know if it would be possible within the budget. Campbell made it work and these spaces are now popular at lunchtime and as an inspiring space for meetings.

Anytime a building of this size and age is repurposed, there will be challenges that affect cost and schedule. However, Alexander compliments Campbell and her staff. “What was helpful was that between Jenny and the project manager, there was very proactive problem-solving to come up with alternatives to come up with the lowest cost and most efficient solution. And we’re here and we love it!”

Part III tells the story of how Collaborative Studio incorporated UMPH’s rich history of religious publishing into the new space.